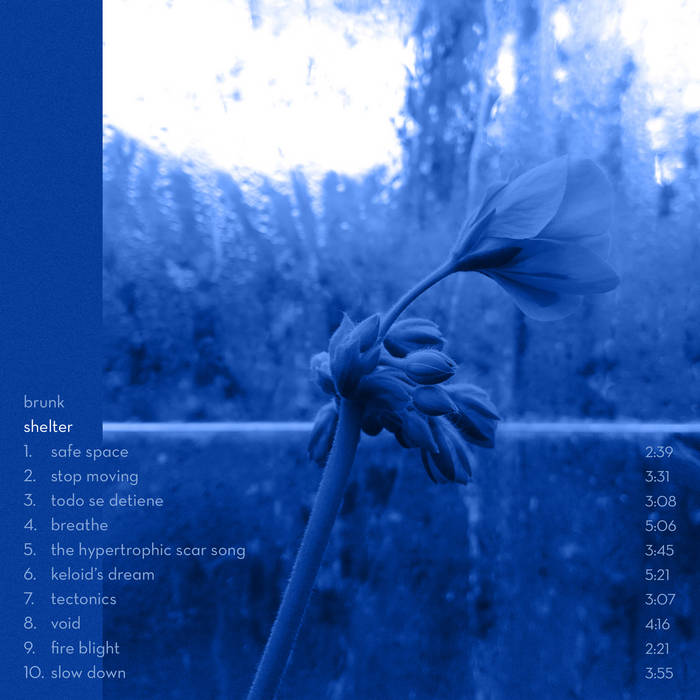 Vital Weekly review:
"Bert Vanden Berghe, the guy behind brunk, writes that he’s sending this but that he is not sure if this is something for Vital Weekly. I am sure he’s been reading these pages for some time, so I was mildly amazed/amused by his question. This surely is what Vital Weekly is about, Bert! Armed with an electric guitar, field recordings and perhaps some electronics, brunk creates ten minimalist pieces of guitar music that he says have ‘American primitive, fingerpicking and noise influences’ and which he calls ‘ambient, drone and soundscapes’ (how does that sound not like Vital Weekly, I wonder). ‘Shelter’ opens with ‘Safe Space’ and it sounds like a piano intro for a ambient house song being stretched over two and half minute, but then that’s just the piece as it is. In his other pieces, the guitar sound is more obvious, right from the next one ‘Stop Moving’, there is that fingerpicked guitar, playing some careful, sparse notes. But there is more to enjoy in this release than just a guitar playing thoughtful, atmospheric, indeed Americana inspired notes. Throughout Brunk adds crackles, a bit of hiss, a drone, some static sounds, such in ‘Todo Se Detiene’, in which the guitar very rarely present. Noise is something that is used almost next to nothing. ‘The Hyperthropic Scar Song’ has some mild distorted sounds to it, but on top of that is the guitar with a rather majestic tune, clean as a whistle. ‘Tectonics’ uses a synth sound (well, or a mobile phone app synth; quite far away) and provides a somewhat different approach to Brunk’s palette of atmospheric sounds, but such is the nature of this album. It veers between the total abstraction and the more pleasant guitar pieces, from pure ambience to mild noise. Thirty-eight minutes long, but with a fine amount of variation in approaches; why didn’t Brunk seek a label to get this material released, I wondered.
It deserves more exposure." (FdW - www.vitalweekly.net/1084.html )

Bandcamp Daily  your guide to the world of Bandcamp

Guests include Kassa Overall and Muriel Grossman, plus an LP of the week by Van Hunt.